Bringing maize to people without food.

We no longer collect donations for this project. This was an acute disaster requiring acute help in 2016.

In Malawi people are dependent on the wet season. Normally, the wet season starts between November and December which is the time in which maize can be sown. This harvest is needed for the rest of the year. The maize is milled into maize flour, from which ‘nsima’ (a kind of porridge) is made. This is the staple food for the Malawian people. They eat ‘nsima’ twice a day with, if available, some fish and vegetables. Normally the maize should have been harvested by then, but there was an extreme drought in Malawi in 2016. A crop failure occurred due to weather phenomenon ‘El Niño’, in which the sea surface temperature along the equator is strongly increased in the eastern Pacific. This influenced the weather around the globe. In some countries, like Malawi, there was barely any rainfall, whereas other countries were flooded.

In Cape Maclear, the village where Aaron is from and where Mariska did volunteer work in 2014, it had rained only once from November to January 2016. Everywhere tiny maize plants where visible, and the tension, helplessness and great fear for hunger could be felt. Because only small amounts of maize could be harvested, the prices sky-rocketed. While in the previous year one bag of maize flour cost 5000 to 7000 Kwacha (6 to 9 euros), now they were sold for 15000 Kwacha (19 euros). Considering that people earn 50 euros a month on average, this was unaffordable. But no maize flour means no food. Aaron knew that a few years back, during another extreme drought, people started eating poisonous mushrooms due to the lack of other food, and died. 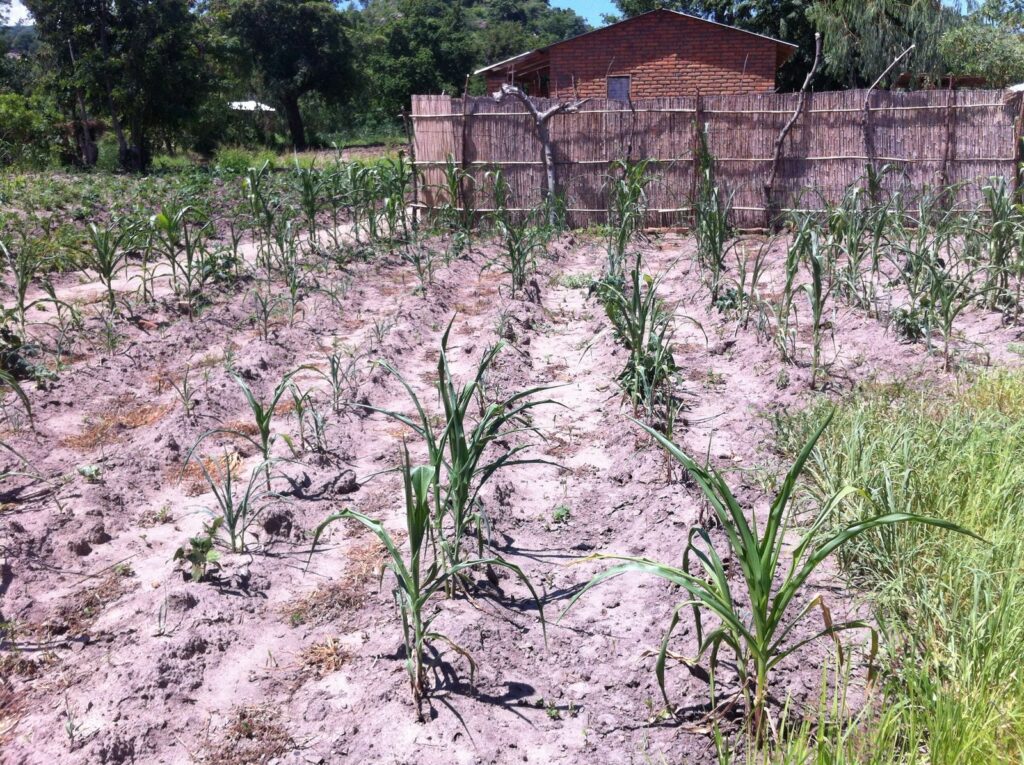 When we experienced this up close, we wanted to do something. Mariska from the Netherlands and Aaron from Malawi. We saw opportunities, but these required money. The maize was cheaper in cities and where more rain had fallen. Locals could not get there and did not manage to buy the maize for these cheaper prices. Aaron himself had a car and could rent a truck to buy the maize somewhere else. If Mariska could collect money in the Netherlands, Aaron wanted to buy the maize flour for 15000 Kwacha (or less if possible) per bag in Malawi. He did not want to give the maize away for free, but sell it for 7000 Kwacha in Cape Maclear. This way, next to the money obtained via fundraising, more money was available to buy maize a second time to be able to help even more people. This way we wanted to prevent famine in the village. Mariska set up a separate bank account for ‘Help for Malawi’ at which donations could be received. Via email she informed family, friends and acquaintances about the problem and the plan. She asked if the email could be distributed even further. In this email Mariska added links to the news items from Malawi that clearly showed the severity of the situation. It was emphasized that with one bag of maize, an average family could eat for 1.5 months, and that the money would be used wisely and well. The money that was raised by Mariska in the Netherlands was directly send to Aaron in Malawi, where it would be in good hands. Also Mariska would keep all donors informed via pictures and updates from Aaron in Malawi.

In total € 1468,- was raised for maize in Malawi. Aaron figured out where the maize could be bought at the cheapest price. It turned out that in the big cities, Blantyre and Lilongwe, less and less maize was available, which caused the prizes to increase again. He heard that the stock of maize was larger, and therefore cheaper, in Mozambique. Aaron rented a truck and bought maize in Dedza, a village close to the border with Mozambique. It was far from easy, as there were long lines of people wanting to buy maize, but he returned to Monkey Bay with the maize. Aaron knows the village and the people well and knew which sick or old people really could not afford to buy maize as they are completely on their own. Sometimes they bought and shared the maize together with their neighbors. Aaron could buy the maize for 16 to 19 euros and sold the maize for the ‘normal prize’ of 8 euros a bag. With these proceeds and the new money collected via the fundraising, new maize could be bought. We thought it was very important that everyone who donated could see it was money well spent. Therefore, all donors received two emails. One with an update, pictures and interim amount, as within 10 days € 550,- had already been donated, and a second one with the final amount and pictures of some of the families with the purchased maize. In total, thanks to the money collected via fundraising, 30 families in Malawi got through this extreme drought and did not suffer from too much hunger.
Previous
Next

Select a project to continue reading

Discover the beautiful Malawi, the warm heart of Africa.

Read about our connection with Malawi and the foundation.

Your donation goes to:

This website uses cookies to improve your experience while you navigate through the website. Out of these, the cookies that are categorized as necessary are stored on your browser as they are essential for the working of basic functionalities of the website. We also use third-party cookies that help us analyze and understand how you use this website. These cookies will be stored in your browser only with your consent. You also have the option to opt-out of these cookies. But opting out of some of these cookies may affect your browsing experience.
Necessary Always enabled
Necessary cookies are absolutely essential for the website to function properly. This category only includes cookies that ensures basic functionalities and security features of the website. These cookies do not store any personal information.
Non-necessary
Any cookies that may not be particularly necessary for the website to function and is used specifically to collect user personal data via analytics, ads, other embedded contents are termed as non-necessary cookies. It is mandatory to procure user consent prior to running these cookies on your website.
SAVE & ACCEPT